I caught up with Jamie Taylor the Sheffield based guitarist for a chat (by email) about his latest project 'Outside Line'
In case you cant read the album cover the personel are:
Garry Jackson -Bass
Dave Walsh - Drums
Jamie Taylor - Guitar
Matt Anderson - Sax 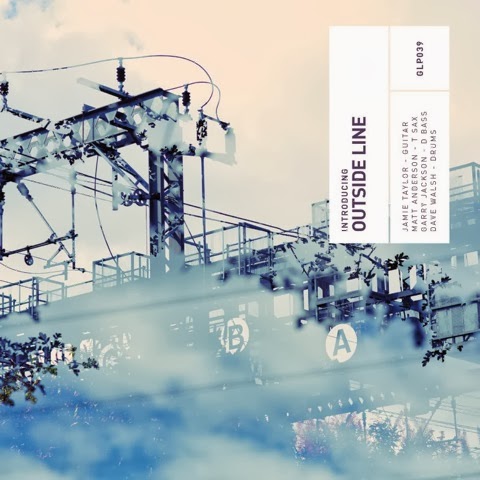 MBS -  It's been five years since your last album, have you been working on this album since then?

JT - The last album (“Cat Dreams”) was with my previous group “Java” - which gradually ceased to be, as we all got busier with different things. I didn’t feel like doing anything of my own for a long time after the last record. I played and recorded with Jamil Sheriff’s big band, and worked quite a bit with other groups like Paul Baxter’s Give A Little Love Orchestra and Ben Lowman’s Django Project. I also did quite a lot of work with vocalists - two records with Sarah Brickel, and a string of dates with Rosie Brown’s “Where Light Falls” project. Eventually, I began to feel ready to get something going again, particularly once I started playing with Matt, Garry, and Dave - the group that became "Outside Line”.

I guess I wanted to wait until I was doing something distinctly different from what I’d done before, and I knew I wanted to switch the line-up to a tenor/guitar quartet, so that I could do a bit more comping. If there’s no piano, that can afford a bit more freedom harmonically sometimes. I also wanted to loosen up my approach a bit and experiment with some different textures and longer forms etc. Finally, just on a practical level, it’s a costly business, making records - I can’t afford to do it too often!

MBS - Did you take a collaborative approach to writing this music or was it arranged first?

JT - I think what we do is pretty typical of how most contemporary jazz groups function. Someone writes a tune (they're all mine, on this album, but Matt has started writing for the group now as well) which will have a melody and harmonic structure in place before it’s brought to the quartet. But then, when we start playing it, everyone’s free to make suggestions. I think you have to get a balance between clarity of vision and collaboration within a group. It’d be crazy to take musicians like these and then try to limit their contributions. At the same time, though, I feel it’s almost as bad to ask really fine players to work with you and then just coast along in their slipstream - you have to know what each player’s special qualities are, and why you think they will combine well together.

MBS - When writing music do you start with the melody, chord structure or a different starting point and build from there?

JT - It can be either. With this record, the stuff on Side One is all quite melody driven so, there, the melodies definitely came first. With the “Three Colours: Blues” suite on Side Two, the idea was to come up with unusual variations on the basic 12 bar blues theme, which meant that structure and chords were perhaps more pre-determined.

MBS - I understand that it was recorded in a secret location, any reason for this?

JT - I wouldn’t call it a secret location exactly but, like all studios, Wharfe Valley Sound doesn’t like to advertise its exact whereabouts for the usual security reasons. In terms of the process, it was lovely. Sam Hobbs is an amazing producer, engineer, and musician. He does everything he can to make you feel like you’re playing live - we were all the same room and there were no headphones in sight! That’s no mean logistical feat, especially in a fairly small space, and it makes such a difference to the music. Almost everything on the record was a first take, which I think says it all really. The kettle was always on as well - music is impossible without a plentiful supply of tea.

MBS - Have you been gigging the album's music before recording or have you recorded it first?

JT - We’ve gigged most of it - the exception being “Fugue (Hazy)” which came together shortly before the sessions. Generally, it’s always better to have gigged material first, I think - you’re more familiar with it and, also, live audiences are brilliant at letting you know what the shape of something should be; they help you to answer questions like: Where are the climaxes? Are there any bits that could get boring? etc.

MBS - Are the musicians on the album, long -time associates or specially selected for this music?
JT - Both. Garry Jackson and I go back to the Jurassic Period, and I’ve known Dave and Matt for several years as well. But, as I said previously, just because you’re friends with someone and know they’re a great player, it doesn’t necessarily mean that a particular combination will work. So, yes - in that respect, they were absolutely chosen for this music.

MBS - You have treated this album as whole rather than a collection of songs, why did you decide to have longer pieces?

JT - Well, I have a great fondness for the golden era of vinyl - you know that sort of 1970s British art-rock thing where you had the gatefold sleeves and pieces took up one whole side of an album? The LP was invented almost by accident, but it’s always felt like the perfect size of canvas to me. I keep waiting for the digital music thing to emulate that - people at the moment seem to prefer convenience, which is fine, but with all these playlists and everything - I don’t know… with some music it can be like shuffling the chapters of a novel. Lots of people have said that, I know...

MBS - What was the inspiration for this album?

JT - Various things, but quite a lot of it was inspired by the arrival of my nephew and niece in the last three years, and the album is dedicated to them - hence “Someone New: Suite”. When my niece was born, I remember going out for a long walk in the Peak District and, when I got home, the first section of that piece came to me in a flash. It’s really funny how that happens; I think the scientists are starting to explain it now, in terms of how certain activities can stimulate other areas of the brain.

MBS - Is the music telling a story?

JT - Not in a strict programmatic sense, I don’t think, but I hope there’s a journey involved. The first suite certainly travels from music that sounds quite uncertain and mysterious in the beginning to a fairly uplifting and positive conclusion - that probably reflects my feeling about life in general. It’s scary at times, but if we have the right people around us, it’ll all be ok!

MBS - Will you be touring the album?

JT - We will, but first I have a UK tour in February with Tom Harrison, Conor Chaplin, and David Lyttle. Once I get back from that, it’ll be full steam ahead with the Outside Line project. I’m just in the process now of trying to get everything organised - I wish there were eight days in the week sometimes. If only The Beatles had been right about that… All my live dates are on my website at www.jamie-taylor.com so that’s the place for people to go if they want to check the progress.

JT - Now we get to the heart of the matter. If someone gave me hot buttered toast and marmalade, I’d be very grateful, and I’m sure I'd enjoy it. But, if I was making it myself, I’d probably stop at the butter stage. 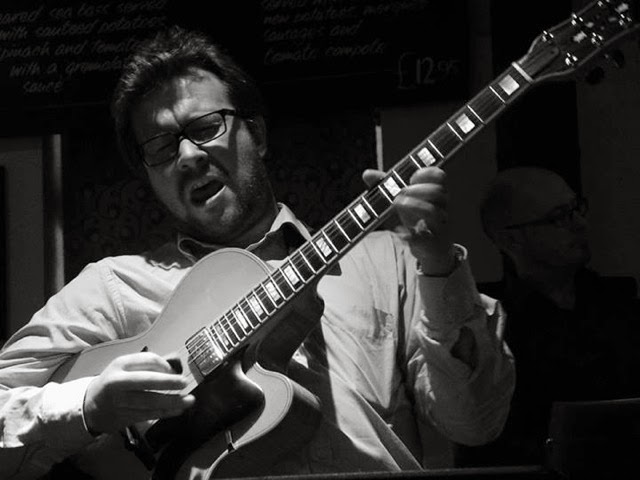 Thank you to Jamie for the chat, I understand the album will be out mid Jan 2014 all details will be on Jamie Taylors website www.jamie-taylor.com there is a preview on sound cloud:
http://soundcloud.com/jamie-taylor-32/introducing-outside-line
Having had a sneak preview, ealier in the year and of the album, all I can say is this is a great album, we have an early copy so will be posting a review here soon!

Posted by mark.beirne.smith@gmail.com at 4:36 AM