It looks as though the 1st Jazz FM awards have announced the nominations.

Congratulations to the only nomination from Leeds ‘Roller Trio’ and to ‘Band on the Wall’ to be the only other nomination from the North of England.
Interestingly the favorites (as they are in 3 categories) Troyka’s next gig will at the Sela Leeds, 19th November. Well that is about the only connection to these Southern jazz awards I can reap.  www.jazzfmawards.com/

Mark
Posted by Unknown at 9:20 AM No comments:

News The sad news that Colin Watson died on 11th October has reached us.

Colin was an educator, guitarist, supporter and promoter of Jazz in Leeds, one of the Seven Jazz comittee and a volunteer at Scarborough. The last gig he played was at the Grove Leeds the Monday before.

The funeral will be held on 24th October, further details - http://www.sevenjazz.co.uk/component/content/article/38-general-news/733-colin-watson-1949-2012 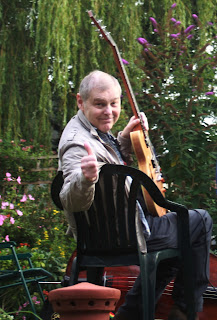 Posted by Unknown at 1:32 AM No comments:

News
Guess what! The British Jazz Awards have been held and one of the winners is in Leeds tomorrow night at Seven Jazz!
For more details:
http://www.sevenjazz.co.uk/component/content/article/38-general-news/735-liane-carroll-wins-british-jazz-award

The audience at The Venue sit patiently as members of the band move their cars in the car park due to the imminent threat of car crime. Already the barrier between audience and performer has been broken down, and despite the short wait for the show to begin, a relationship has begun. Recently being given the title “New Generation Artist” by BBC Radio 3, tonight Trish Clowes proves to everyone present that she is not only worthy of that honour now, but is worthy of close consideration for the future. The set list tonight showcases material from her two albums, “Tangent” and her latest release “And In The Night-Time She Is There”, and is indicative of her abilities to mix classical and jazz music seamlessly together to produce original and elegant results. The first half of tonight’s show features quintet versions of her catalogue and opens with the sinister ‘On-Off’. ‘Seven’ has a more baroque quality, and showcases Clowes’ soft, tantalizing approach to the saxophone. ‘Green Circle’ is further evidence, if that were required, that Clowes’ abilities as a composer and player display a maturity and eloquence so relatively early on in her career.
Gwilym Simcock’s approach to the piano has been well documented, and tonight’s performance sees him in and out of the piano with composure and intrigue. His solos are a squall of phrases which appear restrained yet mischievous.  His manner of playing, which marries a classical training with a love of jazz, perfectly complements Clowes’ approach to composition. Simcock has been instrumental in producing her recorded output, and has contributed piano to a number of the tracks on both releases. ‘Little Tune’ is achingly beautiful, whilst ‘Atlas’ which closes the first set, is soothingly paced and harmonious. Mike Walker, Simcock’s colleague in The Impossible Gentlemen, contributes some genuinely eccentric and novel guitar to these pieces, which again, display virtuosity and self-discipline which he appears to do effortlessly. Having said that, watching him play, there is a palpable sense of enthusiasm and delight.
The second half of the performance expands the quintet into a nonet with the addition of a string quartet. Opening with ‘Coloured Eye’, originally a vocal piece, the compositions now take on a further level of sophistication. The strings, rather than being used to boost the authority of the music, are integral to its development.  ‘Animator’, again originally a song on the album, is romantic yet angular. The ‘Iris Nonet’ trilogy is dedicated to Clowes’ grandmother, who, it transpires, financed her soprano saxophone and flat, and whose cardigan she wore during the composition phase of the album. Each section features agility, comedy, tenderness and density, and utilises the improvising string quartet to achieve astonishing results. Moving through each section the listener can sense a multitude of classical influences informing the writing. Closing with the platform for free improvisation ‘The Master and Margarita’ from her first album release, Clowes may appear a delicate figure on stage and display economy in her saxophone technique, but the performance this evening suggested someone who is totally in control of her playing and production, and will entice future audiences away from their television sets over the next few years.

Posted by Unknown at 6:57 AM No comments: